Teedyuskung: Learn a Little About Our Lake!

Lake Teedyuskung at Woodloch Resort in the Pocono Mountains Lake Region was first known as Big Tink Pond. It was settled in the early 17th century by the Lenni Lenape Native Americans, also known as the Delawares. Little Tink was the pond at the end of the outlet, now known as Little Teedyuskung Lake.

Lake Teedyuskung has about three miles of shoreline and has a maximum depth of 30 feet. The water is clean as can be since it is fed by multiple springs. It carries a brown tint due to the presence of tannic acid, a natural substance given off by the evergreen trees and eastern oaks that populate the shoreline. Tannic acid is also used to stain wood and tan hides as well as convert them to leather.

The lake is home to all walks of wildlife, including deer, turtles, foxes, heron, the occasional black bear, and many varieties of lake fish. Little Teedyuskung Lake is surrounded by wild cranberry bogs, which are also producers of the tannic acid that stains the water. Little Teedyuskung Lake is a modest 15 acres as well as the natural attraction for the destination spa, The Lodge at Woodloch.

What’s in a name?

Namesake of the lake, Teedyskung was a leader, chief spokesperson, and self-proclaimed King of the Delawares during the French and Indian War from 1754 to 1763. Teedyuscung was born in 1700, a member of a group of Lenape Indians acculturated to the ways of the colonists living near Trenton, New Jersey. Teedyuscung dressed in European style, spoke English, and used European goods in his daily life. He was said to admire the European way of life, lamented never learning to read, and could drink a gallon of rum without becoming drunk. To earn a living as a young man, Teedyuscung made brooms and baskets and sold
them to the Trenton settlers.

By 1730, however, with settlers pushing into their land, Teedyuscung moved his wife and son across the river and into Pennsylvania, as many of the Delawares did. A suspicious transaction of land from the Lenape to William Penn called the Walking Purchase was secured, and violence broke out between the Delawares and the colonists. It was then that Teedyuscung began his impromptu role as Lenape spokesperson in an attempt to keep the Penn family from evicting the Delawares from Pennsylvania entirely.

Teedyuscung, along with other Native American leaders, signed the Easton Treaty, promising not to fight with the French against the British in exchange for large blocks of land which had been surrendered a few years prior by the Iroquois. Peace was declared in Easton, and Teedyuscung would go on to advocate for the rights of the Delawares as long as he was alive. However, competing interests with the much more powerful Iroquois Confederacy refuted his claims on land in Wyoming Valley.

On April 19, 1763, without support and unprotected, Teedyuscung died when his home and the whole village of Wyolutimunk was burned to the ground by arsonists who some believe to be colonists. Settlers arrived shortly after, and the last of the Lenape in Pennsylvania were scattered. 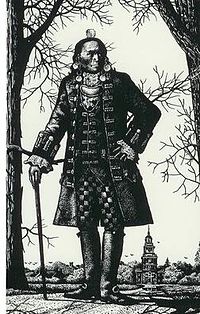